“Weaving threads of history, philosophy, and economics,  Manuel Hinds makes a powerful case for classical liberal democracy… in a time of dizzying technological and social upheaval.”

—Benn Steil, director of international economics at the Council on Foreign Relations and author of The Marshall Plan: Dawn of the Cold War Manuel Hinds has served as minister of the economy (in 1979) and of finance (in 1995-1999) in El Salvador, as division chief at the World Bank (in the 1980s and early 1990s), working with more than thirty countries, and as the Whitney H. Shepardson fellow at the Council on Foreign Relations in New York (in 2004-2005). He is the author of The Triumph of the Flexible Society: The Connectivity Revolution and Resistance to Change, Playing Monopoly with the Devil: Dollarization and Domestic Currencies in Developing Countries, and In Defense of Liberal Democracy: What We Need to Do to Heal a Divided America, and co-author of Money, Markets, and Sovereignty, with Benn Steil. He shared with him the 2010 Manhattan Institute´s Hayek Prize.

About In Defense of Liberal Democracy

In Defense of Liberal Democracy is a clarion call for today's divided time: a bold reaffirmation of the liberal democratic principles that have carried America through each crisis in its history—and can do so again. “This book makes a powerful argument: It should be read by all who wish to act or opine on the critical question of whether one country, one currency is right for the twenty-first century.”

―Lawrence Summers, former Secretary of the Treasury of the United States and former president of Harvard University

“Manuel Hinds gives us a masterful work that bravely stands between liberal democracy and the dustbin of history.”

—Todd G. Buchholz, former White House director of economic policy and the author of The Price of Prosperity

―Nial Ferguson, author of The Ascent of Money on Money, Markets and Sovereignty Ukraine, Russia, and the Steppes of Grief

I began to write this essay in the Fall of 1990 while watching the infinite steppes of the Black Earth Region, which runs along the border of Russia and Ukraine. I was visiting the Soviet Union as part of a team of economists assessing its economic condition on behalf of several multilateral Western financial institutions.… 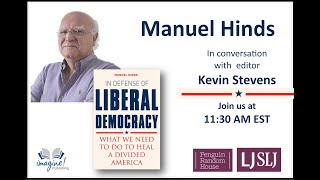 Putting The United Back Into The United States: Author Manuel Hinds On The 5 Things That Each Of Us Can Do To Help Unite Our Polarized Society

"Test your results by approaching someone close to you, starting by saying that you value them more than any position on any issue, and then telling them about the process you have been going through."

Manuel Hinds May 10, 2022 THE CHANGE IN THE CHARACTER OF THE UKRAINIAN WAR As the character of the war in Ukraine shifts from what everybody expected, first a walk-in to Kyiv of the Russian forces or, later, a pulverization of the Ukrainian forces in the Donbas, to a true war with uncertain outcomes, many…